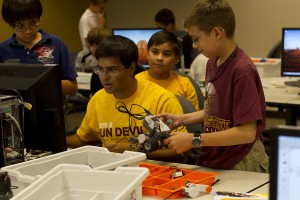 Sami Mian may be a new freshman in the Ira A. Fulton Schools of Engineering this fall, but he is already a Fulton Engineer.

Mian, who will be studying computer systems engineering at Arizona State University, found his niche in robotics when he helped form a FIRST Robotics Competition (FRC) robotics team his freshman year in high school. A couple of years later, he attended ASU’s 9UP Robotics Camp, where he met Yinong Chen, lecturer in the School of Computing, Informatics, and Decision Systems Engineering and director of the camp.

“We learned programming with a specific mindset on robotics,” Mian says. “We also learned more about engineering and the different fields of focus.”

Since then, Mian has cultivated relationships with both Chen and Patty Smith, a K-12 education outreach coordinator for Fulton Engineering and FIRST LEGO League (FLL) operational partner in Arizona. This has led to further opportunities to pursue robotics, and inspire others.

Mian has volunteered as a judge at FLL for two years, and taught at BEST Camp this summer. Last year, Mian taught at the 9UP Robotics Camp as a volunteer, and this summer he was hired as a full-time, paid instructor.

“The best part is that we had a few kids who enjoyed the experience so much that they are planning to go back to their schools to start their own robotics teams. So, we are not only helping them continue to pursue their new-found passion, we are inspiring them to share it with others,” Mian says.

Mian’s FRC team helped launch three more FRC teams at other high schools in the district. He helped mentor the teams in programming. Students on those teams now also help with FLL programs.

FLL and the Robotics Camp are just two programs among a variety of on-campus activities, after-school programs, summer camps and collaborations with faculty and engineering student organizations that are designed to inspire young students to pursue science, technology, engineering and math-related fields.

Mian says he wishes he had known about the summer camps earlier. “I got a late start. I know that not everyone who goes to the camps will pursue engineering, but it opens your eyes to the possibilities.”

Throughout all of his experiences, Mian says that he has seen many of the different applications of robotics and, while working on a team, found that he liked the business aspects which led him to a double major in business.

Mian was accepted to the University of California, Berkeley and Carnegie Mellon, but after receiving a prestigious Flinn Scholarship, chose ASU because of all of the relationships he had built.

Mian says he hopes to use his knowledge to pursue an entrepreneurial path or work with a technology firm.