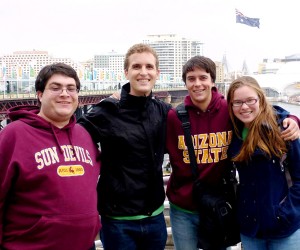 Members of a team of recent Arizona State University graduates and one undergraduate student say their endeavor to help combat hunger will benefit from their experiences at the recent Microsoft Imagine Cup World Finals – the premiere international student technology competition.

Team FlashFood competed against 105 student teams from more than 70 other countries July 6-10 in Sydney, Australia.

“We had the opportunity to interact with so many brilliant people from all walks of life,” says team member Katelyn Keberle, a junior materials science and engineering major in ASU’s Ira A. Fulton Schools of Engineering.

What they learned at the event, she says, will make the team “better at telling our story, and we have new ideas for how to reach out to the community, to further develop our company, and to provide a valuable resource to nonprofits around the world.”

FlashFood is developing a mobile-phone application to help establish networks that would connect restaurants, hotels, catering and banquet services with teams of people who would collect leftover food and transport it to community centers, churches and other neighborhood gathering places where it would be distributed to people in need.

The app is designed to send out a text message to subscribers to the service in local communities to inform them where and when food will be delivered. “This is a huge component of our service that makes us stand out from similar types of services,” says team member Jake Irvin, a recent marketing and sustainability graduate.

The FlashFood idea brought the team a first-place finish last spring at the MicroSoft Imagine Cup U.S. Finals and earned them a spot in the Imagine Cup World Finals.

Also there was FlashFood’s faculty adviser Richard Filley. He is director of ASU’s Engineering Projects in Community Service (EPICS), which enables ASU students to apply their engineering skills to aiding community projects.

FlashFood emerged from ideas generated through the EPICs program courses and from Irvin’s participation in the Students in Free Enterprise program through ASU’s W. P. Carey School of Business.

Two other team members, Loni Amundson, a recent sustainability graduate, and computer science graduate Ramya Baratam, made the trip to Australia but did not compete due to Imagine Cup restrictions on team size.

At the competition at the Sydney Convention Center, the team made presentations about its venture to panels of judges, and worked with a mentor provided by Microsoft. Randy Gutherie, a designated Microsoft Imagine Cup Academic Development Evangelist, acted as a guide for the team, giving them feedback after each round of the competition and assisting them with strategy planning.

Team members attended networking events and discussions on entrepreneurship and innovation, and met students from a variety of countries. “It was really fun meeting people from other countries equally passionate about using technology to help people,” Keberle says.

“The biggest win for us at Imagine Cup was the positive response to our project from reporters and business people,” Lehnhardt says. “No one likes to see food wasted, and Imagine Cup allowed us to make our case on a global stage and meet people who can help make our dream a reality.”

FlashFood members say the international exposure is pushing them to work on ways to adapt their enterprise to operate in other countries and cultures.

For its performance in the Imagine Cup World Finals, the team earned an opportunity to apply for Imagine Cup grants to fund the team’s efforts.

Eligibility for the one-time grants for up to $100,000 is available to any team that has won a national Imagine Cup final.

When not involved in the Imagine Cup activities, the students found time to sightsee, visiting the Taronga Zoo, Sydney Harbor Bridge and the Sydney Opera House.

The team will be back at work soon, including making preparations for another national technology/entrepreneurship competition. FlashFood has earned a place in the semifinal round of the Global Sustainability Challenge hosted by YUM!, a multinational restaurant company, in November in Louisville, Ky.