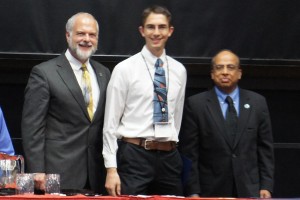 Senior chemical engineering student at the Ira A. Fulton Schools of Engineering, Zachariah Berkson, was recently awarded first place for the best undergraduate student poster at the annual international Air and Waste Management Association meeting. Berkson traveled to San Antonio, Texas, to present his work at the meeting on June 20, 2012.

The Fulton Undergraduate Research Initiative, which Berkson has been a member of since the summer of 2011, provided the funding for his trip through their travel grant program. “The conference was really cool,” he says, “I had never been to anything like that before.”

The AWMA meeting was at San Antonio’s Henry B. Gonzalez Convention Center, and it brought together consultants and industry associates from government organizations and private firms. “It was a lot of people doing a lot of different things that you are not exposed to in an academic setting,” explains Berkson.

He was selected out of nearly 30 student poster presenters as the best undergraduate poster. There were additional awards to master’s and doctoral students presenting their work. The students came from all over the country as well as from Canada and Taiwan.

Berkson has been working solo on his project since his start with FURI. His mentor is associate professor Jean Andino of the School for Engineering of Matter, Transport and Energy.

“I work in carbon dioxide recycling,” says Berkson. The idea behind his project is to find a way to convert industrial scale carbon dioxide into fuels, such as methane and methanol, using titanium dioxide and sunlight. This project would reduce greenhouse gas emissions and produce a sustainable form of recycling carbon dioxide emissions back into fuel without expending energy in the process.

“The proof of concept has already been done,” he explains. The process is known to work, but they do not yet understand how or why.

Berkson’s current focus is to research and understand what causes the resulting variety of products, from methane to carbon monoxide, and how this result can be controlled to produce the most desirable fuel. “We know it works, but not why, and to make it work better we need to know why it works,” Berkson says.

His first steps will be learning about the behavior of electrons during this process and how they can be controlled. “Once we understand these mechanisms we can design better catalysts that will give us what we want at high yields activated by sunlight,” he says, “That is when we can start talking about industrial processes.”

Berkson’s interest in renewable energy led him to explore the research options available in the FURI program. “I’ve always wanted to do something in renewable energy, but I didn’t really know what that meant when I first started in the engineering program,” he explains. He shared his passion with Andino, who also instructed one of his engineering courses. She offered him the opportunity to work for her through FURI on the carbon dioxide recycling project.

It was just as simple for Berkson to travel to Texas for the AWMA meeting and present his work. After filling out some paperwork for applying, he was awarded the means to promote his hard work and experience something new and exciting as an undergraduate.