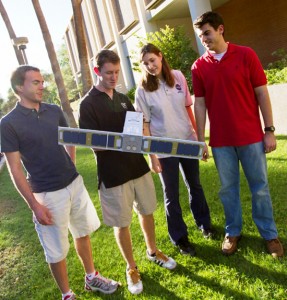 Solar flares are nothing to be ignored. They can be signs of the formation of gigantic solar storms that could propel powerful electromagnetic bursts of charged particles from the Sun to collide with our planet’s magnetic field.

The result might be widespread electrical power blackouts across the globe. Large swaths of the wired world would instantly become unwired. Collateral damage could be severe enough to put large segments of the population at risk of being without some life-sustaining resources.

Avoiding such catastrophe may depend in large part on better understanding solar flare behavior and increasing the ability to forecast when flares might signal impending solar superstorms that could have an impact on Earth.

A group of Arizona State University engineering and business students hope to play a role in advancing knowledge about solar flares.

Their Sun Devil Satellite 1 project is aimed at providing the National Aeronautics and Space Administration a small satellite equipped with components designed to help study flares during their formative stages.

The venture began in the summer of 2009 after Aaron Goldstein – then a freshman beginning studies in aerospace engineering and aeronautics in ASU’s Ira A. Fulton Schools of Engineering – landed an internship in the satellite systems engineering department of General Dynamics corporation.

His experience there motivated him to organize some fellow undergraduates to enter a competition sponsored by the American Institute for Aeronautics and Astronautics. They designed a satellite mission to monitor space weather effects on the Earth’s magnetic field.

The team didn’t win the competition but it did develop a cost-effective satellite design proposal that eventually would be the basis for a joint venture with NASA’s Goddard Space Flight Facility.

A year later, at the start of the fall 2010 semester, Goldstein again gathered fellow students to organize the Sun Devil Satellite Laboratory. Within several months they attracted the attention of a solar science research team at NASA’s Goddard center with their ideas for an earth-imaging satellite. That in turn led to a new effort, the Sun Devil Satellite 1 mission focusing on observation of the Sun.

The mission team has since completed successful preliminary NASA design reviews and is planning to have a satellite built in time for a projected 2015 launch.

The group is developing the Flare Initiation Doppler Imager as the main instrument to be attached to the roughly nine-pound satellite, and is building the platform on which the imager will operate.

If it works as planned, the imager will take rapid-fire photos of the Sun to capture solar flares as they emerge. The data it collects could aid research to predict the intensity of flares and forecast potential impacts on the Earth.

The project has been not only an engineering effort but a lesson in assembling the resources necessary to sustain an ambitious research and technology development endeavor.

The students have had to embark on some business networking to secure the necessary technology industry support.

Those benefactors included Paul Johnson, dean of the Ira A. Fulton Schools of Engineering, associate dean of student and academics affairs James Collofello, along with Kyle Squires, director of the School for Engineering of Matter, Transport and Energy and Valana Wells, chair of the mechanical and aerospace engineering program.

“It’s kind of remarkable what we’re accomplishing, considering it started with a small group of people who just thought it might be interesting to try to build a little satellite,” he says.

He continued the internship at Orbital throughout his undergraduate years at ASU, and after graduation this spring was hired full time to work in the company’s systems engineering department, supporting its satellite technology operations.

Goldstein wants to use his experience in satellite and electronics design to someday start his own aerospace and electrical engineering design company.

Since the start of the Sun Devil Satellite 1 project, he estimates that more than 70 ASU engineering students have made at least some small contribution to the effort, but a group of 12 have been the prime movers.

One of them, senior aerospace engineering major Christopher Kady, says the satellite lab has provided him and fellow project members with invaluable experience in applying classroom lessons to real-world engineering challenges.

Kady is leading work on the satellite’s attitude-control subsystem, which enables the satellite to rotate in space and position itself appropriately to view its target – in this case, the Sun.

Kady and Goldstein exhibited the lab’s work on the system earlier this year at the Massachusetts Institute of Technology’s Interplanetary CubeSat Workshop. (A CubeSat is a miniature satellite designed to gather research data in space.)

Goldstein plans to stay on with the project as its primary industry adviser at least until the Satellite 1 launch by NASA.

By that time, he says he hopes the Sun Devil Satellite Laboratory will be taking on new challenges and establishing ASU as a center of student-led satellite research and development.