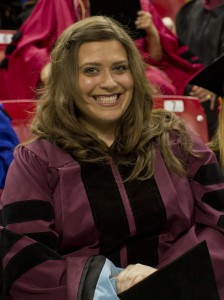 Carrie Robinson has been named associate director, academic achievement and student success for the Ira A. Fulton Schools of Engineering. Previously she was executive coordinator, overseeing scholarship programs and other activities for academic and student affairs.

In her new position, Robinson will be working on first year programs and student success initiatives. She says that the goal is to take a broad look at retention—what are the resources needed to not only keep students after their first year, but to have them continue in engineering through graduation.

She says the strong focus on retention is what attracted her to the position.

Robinson has both personal and professional knowledge about the challenges in keeping students going in a rigorous degree program. She started college as a math major, then switched, earning a bachelor’s degree in planning, public policy and management from the University of Oregon. As a recruiter for the School of Medicine at University of Southern California, she saw many students leave before graduation.

Robinson holds a master’s from USC and recently earned her doctorate degree from ASU in higher and post-secondary education. Her dissertation was on retention of Latinas in engineering.

As a first-generation college graduate, Robinson says she never expected to hold three degrees and find a career in higher education. She notes that it has been a natural progression based on her own experience.

“Working at the university, you get to see so many cool things. Students are a constant source of inspiration,” she says.

Robinson joined ASU and Fulton Engineering in 2008. She serves as faculty advisor to the Society of Hispanic Professional Engineers (SHPE) student chapter, and has served as an Obama Scholar mentor.