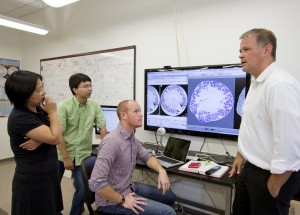 Research led by an Arizona State University biomedical engineer and physicist to find more effective ways of detecting the onset of kidney disease is getting support from the National Institutes of Health (NIH).

The NIH has awarded $400,000 to Kevin Bennett, an assistant professor of the School of Biological and Health Systems Engineering, one of ASU’s Ira A. Fulton Schools of Engineering.

The grant will support his team’s research focusing on a common form of kidney disease called nephritis.

“A significant portion of the diabetic population and others will develop kidney disease. The earlier we can detect it, the more likely it is that we can effectively treat it,” Bennett says.

The current method of identifying kidney disease is to perform a biopsy, which can be painful for patients and prone to errors. Bennett is working on a method using magnetic resonance imaging (MRI) technology that involves magnetic particles.

By doing an MRI scan on a kidney onto which magnetic nanoparticles have been bound, it creates a visible distortion in the image that enables researchers to extract information about the nephron.

The distortions in such images enable nephrons to be accurately located, their size can be determined and changes in their behavior can be revealed. “If we can detect changes in nephron function early, patients can be treated earlier and with better results,” Bennett says.

Another application of the research is in examination of the relationship between the number of nephrons and the risk of cardiovascular and kidney diseases in humans, which is currently done by taking sections of body tissue.

“We are doing this with noninvasive imaging. We are developing ways to detect all of this without having to do biopsies or collect body tissue,” Bennett explains.

Bennett’s team includes: professor Teresa Wu, an industrial engineer and an associate professor in the School of Computing, Informatics, and Decision Systems Engineering in the Ira A. Fulton Schools of Engineering; Min Zhang, a doctoral student working under Wu; professor John Bertam, head of Anatomy and Developmental Biology at Monash University in Australia; and Scott Beeman, a biomedical engineering doctoral student working in Bennett’s laboratory.

Beeman has taken a lead role in the kidney research project and recently presented a progress report at a meeting of the International Society for Magnetic Resonance Medicine in Melbourne, Australia.

“It’s rare that a Ph.D. student can push a whole field of research forward, but that’s what Scott has done,” Bennett says.

The team is already in the preclinical stage of research. “We are moving the technique to clinical trials, and we have already developed better nanoparticles and more sensitive ways to detect them.”

The next step will be working with human donor kidneys.

The research is being performed at the Center for Preclinical Imaging, established through a collaboration between the Ira A. Fulton Schools of Engineering and the Barrow Neurological Institute at St. Joseph’s Hospital and Medical Center in Phoenix. The imaging center houses the first – and still only – preclinical MRI technology in the greater Phoenix area.

The kidney research “is only one of many important projects that have been supported by the investment” in the center, Bennett says.

The Center for Preclinical Imaging was established with support from ASU research administration officials and the Ira A. Fulton Schools of Engineering dean’s office, along with Barrow Neurological Institute administrator Ron Lukas and Joan Shapiro, past vice president for research at the institute.

The support of professor Marco Santello, director of ASU’s School of Biological and Health Systems Engineering, as well as that of James Pipe and Mark Preul, both adjunct faculty members in the school, has also been instrumental in the center’s success.

Bennett gives special credit to Pipe, the director of Neuroimaging Research at the Keller Center for Imaging Innovation at the Barrow Neurological Institute.

“We could not have built this facility without the partnership with Jim Pipe, who continues to be recognized for his groundbreaking research,” Bennett says.

Bennett is on the imaging center’s administrative board, along with Pipe and Barrow institute professor and administrator Gregory Turner, who manages the imaging facility.