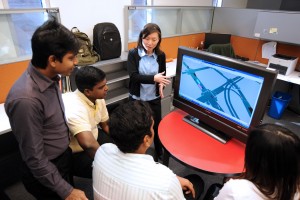 Soyoung Ahn has won an NSF CAREER Award to investigate the effects of driver behaviors on traffic state transitions.

Ahn’s research focuses on transition points—changes in traffic conditions such as speed—and how driver behaviors such as lane-changing and car-following impact traffic flow.

“Traffic scientists often treat vehicles as fluid particles and model them using concepts borrowed from fluid dynamics,” Ahn says. “We can describe equilibrium traffic quite well using these models, but we don’t understand very well the mechanism of how traffic changes from one state to another.”

Her research involves analyzing how drivers make decisions and how that process changes as they go through areas of disturbance.

“Driver behavior can vary widely,” Ahn says. “If we can identify those reactions in a state of non-equilibrium, it will give us a better understanding of the affect on traffic conditions and traffic evolution.”

Her research will encompass collecting new individual vehicle data, analyzing the general features (e.g. changes in traffic flow, density and speed) and analyzing driver behaviors relative to the traffic features. The goal is to develop models capable of reproducing these phenomena in order to help plan long-term solutions.

“We want to find out how congestion originates so we can devise strategies to help alleviate bottlenecks and avoid crashes due to sudden changes in speed,” Ahn says.

Students working with Ahn will be an integral part of the data collection and analysis. For example, using smartphones equipped with GPS, students can track destination, driving time and traffic congestion data.

“Transportation is an essential component of civil engineering, but there are still many challenges that we face,” Ahn says. “Probably everyone can relate to how this research can impact their daily lives.”

Prior to joining ASU in August 2006, Ahn received her Ph.D. in civil and environmental engineering from the University of California, Berkeley and served as a postdoctoral research associate in the Department of Civil and Environmental Engineering at Portland State University, Oregon.