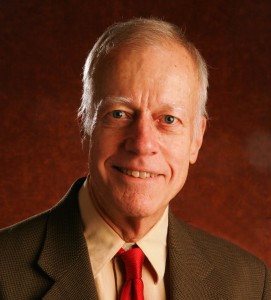 Joseph Davidson, an accomplished researcher in robotics and kinematics, has taught mechanical engineering at ASU since 1973.

The Department of Mechanical and Aerospace Engineering at The Ohio State University gave Davidson its Charles Kettering Lifetime Achievement Award, named in honor of the late famous inventor, engineer and Ohio State graduate.

Davidson is an emeritus professor of aerospace and mechanical engineering in the School for Engineering of Matter, Transport and Energy, one of ASU’s Ira A. Fulton Schools of Engineering.

He earned undergraduate and graduate degrees at Ohio State. When he received his doctorate in 1965, he was one of the youngest students ever to have earned a doctorate in engineering at the university.

Davidson came to ASU in 1973 and has since been teaching mechanical engineering and related subjects, including kinematics, robotics, engineering design and design geometry.

His research focus has been kinematic geometry of mechanisms and robots, geometric tolerances in design and manufacturing, and mechanical design.

“The tolerance topic involves just about everything that has to be manufactured. Examples are circuit boards in electronic equipment, or mechanical assemblies, like engines,” Davidson explains.

“It’s about anything where moving parts have to be manufactured to fit together to produce a sophisticated device, like the components of automobiles, aircraft, ships and trains,” he says.

Davidson has been at the forefront of important advances in his field, says ASU aerospace and mechanical engineering professor Jami Shah, a fellow Ohio State alumnus who nominated Davidson for the award.

Davidson achieved prominence for his expertise in robotics and kinematics – a branch of mechanics involving the geometry of motion.

Shah says Davidson has done pioneering work in mapping workspaces in which robotic technology is employed, and made significant in contributions to screw theory, which involves the algebra and calculus of pairs of vectors – such as forces and moments, and angular and linear velocity – that arise in the kinematics and dynamics of rigid bodies. The textbook on screw theory Davidson co-authored is among the most authoritative on the topic, Shah says.

Davidson is also the principal inventor of T-maps, for which he holds a patent. T-maps provide a revolutionary approach to analyzing geometrical and dimensional variations in manufactured parts and mechanical assemblies.

Shah describes Davidson as “a dedicated teacher and model mentor” who has been helping pave his students’ path to success in both industry and academia.

“He has an uncanny ability to dissect and analyze complex problems to get down to the key issues quickly,” Shah says. “He is a great engineer and one of the smartest people I know.”

Shah also points to Davidson’s support of professional engineering organizations and student chapters of engineering societies, and involvement in community service – particularly in support of the National Park Service, the Cave Research Foundation, and The Nature Conservancy.

Davidson officially retired in January but continues to teach part-time. He also serves as an adviser to graduate students and is conducting research with support from the National Science Foundation. This semester he is co-teaching a course with Shah, a fellow Ohio State alumnus.

Over the years, Davidson’s stature has led to collaborations with other major research universities and engineering programs.