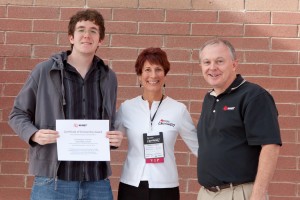 Christopher Thornton, sophomore studying computer science and student in Barrett, the Honors College won the AndroidTM App Showdown in the 2012 Avnet Tech Games, held on April 14. He will receive a $1,000 scholarship.

Using Google’s Android SDK, participants were tasked with developing a reporting app that could read a log file and display data in an easy-to-use, visually appealing way on a tablet computer.

The Android App Showdown was one of the virtual competitions, giving participants just under two months to plan and program the app. Ten teams of 1-2 students each competed in the event.

Thornton says that he was familiar with Android and app development, but had not worked with the tablet format. His goal was to evaluate the requirements first to be sure that he had covered all of the specific requirements.

“In a competition like this, if you miss a requirement it is unlikely that you would win,” he says. “In the real world it means you would have an angry customer.”

Thornton then looked at existing apps for tablets—he wanted to take advantage of as much of the functionality of tablets as possible. Finally, he worked on programming and refining the UI.

A panel of judges including technology firm executives, engineers and technical experts selected the winners based on the students’ ability to implement the required features and apply innovative approaches to the solution. 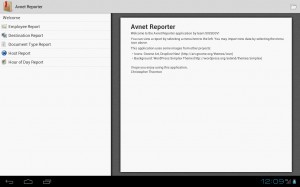 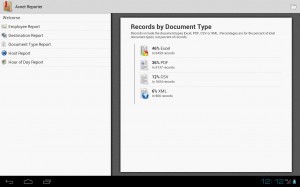