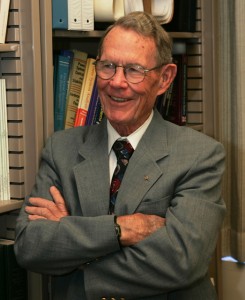 Richard Farmer won prestigious awards for his work as a power systems engineer and as an educator. He was elected to the National Academy of Engineering. Photo: ASU

Professor Richard Farmer, who taught electrical engineering at Arizona State University for most of the past 45 years and was elected to the National Academy of Engineering, died at his home in Phoenix on March 26.

“Professor Farmer was a tireless contributor to our electrical engineering programs and the electric power industry for more than four decades. During his service at ASU, he made a positive impact on thousands of our students,” said Stephen Phillips, a professor and director of the School of Electrical, Computer and Energy Engineering, one of ASU’s Ira A. Fulton Schools of Engineering.

A U.S. Navy veteran, Farmer earned his master’s degree in engineering from ASU in 1964. The next year he began work at Arizona Public Service Co. (APS), the state’s largest electricity utility company, where he would eventually become principal engineer.

In 1966 he began teaching one course each semester at the university. After retirement from APS in 1994, having spent almost 30 years with the company, he began teaching additional courses and later attained full professorship.

In his time at APS, Farmer led projects that developed technologies to improve the efficiency and reliability of electrical power generation and transmission systems.

He was elected to the National Academy in 2006. The honor is among the highest distinctions in engineering, as it recognizes outstanding contributions to engineering research and education, advancement of engineering fields and pioneering of new technology.

In 1986 Farmer was elected to the status of Fellow of the Institute of Electrical and Electronics Engineers (IEEE), the world’s largest professional association for the advancement of technology.

In 2007 the IEEE’s Power Engineering Society gave him the highly prestigious Charles Concordia Power Systems Engineering Award for “innovation in the development, analysis, measurement and mitigation techniques for subsynchronous resonance and leadership in the area of power system dynamic analysis.”

Subsynchronous resonance was a problem for electric utilities in the early days of series compensated transmission lines. Farmer “was one of the core group of investigators who recognized, explained and provided solutions,” said his APS colleague Douglas Selin.

Farmer wrote and co-wrote several books and other publications on power systems engineering, and was a sought-after conference speaker.

He also was a valued mentor to both students and younger colleagues.

ASU associate engineering professor Dan Tylavsky recalled how Farmer drew on his decades of industry experience and “breathed life into a wide range of courses with extremely technical and intricately complex subject matter. And invariably he has inspired students by creating vivid images from lifeless content.”

Farmer brought “a rare blend of academic excellence and wealth of industry experience” to his teaching, said former student Siddharth Suryanarayanan, now an assistant professor of engineering at Colorado State University. “He truly left a deep impact on his students. His mentoring led many of them to success.”

“It was not unusual for students to be in his office at all hours to seek practical advice on a homework assignment, a thesis, or just for advice on a job offer,” Heydt said.

Farmer’s devotion to students and their esteem for him, Heydt said, was expressed poignantly in a note left with a bouquet of flowers outside Farmer’s door shortly after news of his death. It read: “Thank you Professor Farmer for showing me what kind of man I really want to be.”