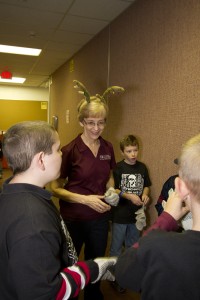 Patty Smith with the Techno Ninjas team at the 2011 FLL Regional Competition.

Patricia Smith recently received the Outstanding Volunteer of the Year award from the FIRST Robotics organization in Arizona.

Smith is a K-12 outreach coordinator for the Student Outreach and Retention Program in the Ira A. Fulton Schools of Engineering. She oversees the Arizona FIRST LEGO League robotics competition program in which thousands of young students throughout the state participate each year.

FIRST (For Inspiration and Recognition of Science and Technology) seeks to engage children and young teens in mentor-based programs to build science, engineering and technology skills.

“The growth in participation is exciting,” Smith says, “but even more so is the increase in student teams from underserved communities” whose schools are not able to provide many opportunities for education in STEM (Science, Technology, Engineering and Math) subjects.

At a ceremony at Hamilton High School in Chandler, Smith accepted the award “on behalf of nearly 1,000 dedicated, enthusiastic volunteers statewide, who make this unique learning opportunity possible for Arizona’s children.”