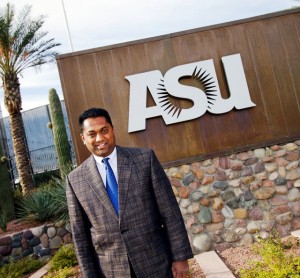 Samuel Ariaratnam is an international leader in both research and education in modern techniques for construction of underground infrastructure. Photo: Jessica Slater/ASU

Ariaratnam is a professor in the Del E. Webb School of Construction Programs within the School of Sustainable Engineering and the Built Environment, one of ASU’s Ira A. Fulton Schools of Engineering. He serves as chair of the construction engineering program.

The magazine’s Person of the Year award recognizes the recipient’s career achievements.

“This is the highest honor you can receive in trenchless technology,” Ariaratnam says. “I’m humbled when I look at previous winners. Some of them are amazing pioneers in the industry.”

Trenchless technology is a growing sector of the construction and civil engineering industry. Ariaratnam describes its focus as “finding economical, sustainable and environmentally friendly ways” to install, repair or replace underground infrastructure – including pipelines, water and sanitation systems, and other utility networks. It methods seek to achieve those goals with less disturbance to roadways and buildings than conventional underground construction techniques.

Within the field, Ariaratnam is a leader in research and education in urban infrastructure management and rehabilitation, trenchless pipe replacement and underground utility asset management.

Ariaratnam’s stature in the field led to his selection last year to serve a three-year term as chairman of the International Society for Trenchless Technology, which has more than 5,000 members through affiliate societies in 34 countries.

He has particular expertise in horizontal directional drilling, a method used to install water, sewer, telecommunication, electrical and gas lines with minimal impact on surface ground. His research has helped numerous municipal agencies to use trenchless technology construction methods to reduce infrastructure installation and repair costs by millions of dollars.

Among numerous honors for both teaching and research, he was named one of the “Top 40 under 40” in 2006 by the Phoenix Business Journal. It recognizes up-and-coming leaders in industry, business, education and other fields in the Phoenix metropolitan area.

Ariaratnam says he feels fortunate to be teaching ASU students about a field “that can offer them more options for their future because trenchless technology is becoming more important with the nation’s growing need to replace aging underground infrastructure and construct more advanced systems.”

He was honored for his achievements and presented the Person of the Year award in a ceremony during the North American Society for Trenchless Technology No-Dig Show in Nashville, Tenn., on March 12.

His contributions to his field are the subject of the cover story of the March issue of Trenchless Technology magazine.