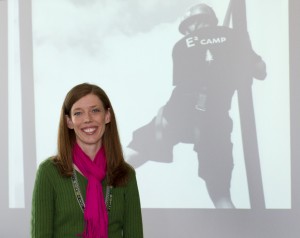 Sara Jarvie in front of the photo she took at E2 Camp in 2008. Photo: Jessica Slater/ASU

Are you E2 Camp Man?

We are looking for the person behind the picture. If this is you, or you recognize E2 Camp Man, let us know.

When Sara Jarvie took the now famous “E2 Camp man” photo at the first camp in 2008, she didn’t realize it would be such a great photo; she just wanted E2 Camp to stand out.

Since that time, the iconic image of a student on the high ropes has represented Fulton Engineering in a wide range of publications, including the cover of last year’s annual report.

Jarvie, an undergraduate advisor in the School for Engineering of Matter, Transport and Energy, was on the committee that established E2 Camp. She has been to camp every year since then.

“My favorite part is hearing from new freshmen that they want to come back as mentors the next year,” she says.

On campus, Jarvie says she has “a great job.” As an undergraduate advisor, she says her role is to provide resources, be a counselor and listen, but also empower students to make the final decisions.

She encourages students to get involved through student clubs.

“Clubs allow students to start using their engineering skills early,” she says. “Plus it is an opportunity to network with companies and other students.”

Jarvie says that the same advice holds true for faculty and staff.

“ASU is so big. Student organizations provide a smaller setting that enables me to build stronger relationships with students,” she notes.

Jarvie serves as faculty advisor for the Society of Women Engineers, a thriving ASU engineering organization. SWE hosts a number of activities from dinner with the professors to the upcoming Gear Day. Gear Day is one of SWE’s outreach activities, designed to engage younger students in engineering through fun projects where they build circuit boards, airplanes and solar cars.

“We want to show young girls that engineering is cool,” she says.

This is Jarvie’s tenth year advising, including four years with ASU. Previously, she was with George Washington University, where she also earned her master’s in higher education administration. She was lured to the Valley, in part, because two brothers live here.

Outside of ASU, Jarvie obviously has a passion for photography. It started with a high school class which led to freelance wedding photography. She also loves to travel, and her gallery showcases images from California to Croatia. See more at JarviePhotography.com.