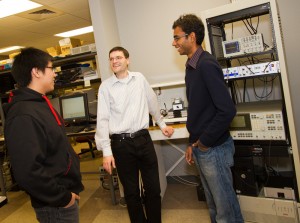 Michael Goryll, assistant professor, School of Electrical, Computer and Energy Engineering has received an NSF CAREER Award to advance his work recreating the functionality of a natural ion channel using a solid-state nanopore.

Ion channels exist in the cell membrane, regulating the flow of ions in and out of the cell. Natural ion channels are fragile—susceptible to changes in pH and temperature. Goryll is working to create a more robust, versatile solution using electrostatically controllable solid-state nanopores.

“We already know a lot about ion channels, but we constantly realize that we don’t know too much. We are looking at what we have to copy from nature to make it work in silicon,” he says.

One aspect of his research is gaining a better understanding of how natural channels allow some ions and molecules to pass through the channel, but not others. That knowledge is used to reproduce electric field geometries that repel or attract molecules in a similar way to natural channels.

The use of engineered nanopores as biosensing elements is a rapidly developing area. The sensors can be used for a wide range of applications from testing water quality to disease diagnostics.

“We can develop new biosensors that are selective and can detect single molecules,” he says.

Goryll cites drug discovery as an area of particular interest. For example, several drugs have been pulled from the market, or denied regulatory approval due to potentially life threatening reactions including clinical arrhythmia. Preclinical testing for these interactions can only be done by ion channel research.

Goryll and students in his lab have already made advancements in ion channel research. Shankar Ramakrishnan, an electrical engineering doctoral student, developed an acrylic cup array that allows parallel measurement of four channels at the same time versus existing devices which only allowed an individual measurement. He also constructed a multichannel, low-noise amplifier along with the cup array, which allows recording the extremely small ionic current through the ion channels. Xiaofeng Wang, also an electrical engineering doctoral student, investigates how nanoparticles move through silicon nanopores. He also fabricates the solid-state nanopores using the equipment in the CSSER cleanroom labs at ASU.

Goryll joined ASU faculty in 2007. Prior to joining ASU, he spent several years at the Research Center Juelich, the largest national lab in Germany. He holds a Ph.D. in physics and Diplom in physics from the RWTH Aachen University in Germany.