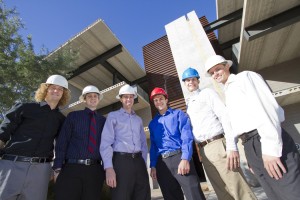 Known as the Reno Competition, the event attracts over 1,200 students from about 35 schools.

In individual awards, commercial team member Chris Freier was recognized with a Superintendents Award. John Safstrom, a member of the building information modeling team, was recognized with an outstanding performance award by the problem sponsor, Webcor. He was also awarded an internship with Webcor. Kim Rahberger was given special recognition for her work on the safety portion of the concrete team’s project.

William Fugett was on the team that took first place in the alternate problem category. Teams are allowed a maximum of six members with one alternate. This year, alternate members had the opportunity to form teams from various schools and compete in a special category. Over 150 students formed 20 teams for this category.

At the competition, student teams assume the role of a real company bidding on a project. Each competition category has a corporate sponsor who presents a real-world construction project. Teams have less than 24 hours to address the problem and submit a proposal, then present to a judging panel the next day.

ASU has been involved in the competition for many years. Skyler Holloway, junior in construction management, has participated for three years. As captain of the winning design build team this year, he gained a new perspective.

The competition also gives participants the opportunity to make industry connections. Teams receive valuable hands-on coaching leading up to the event and often sponsorship from local companies. At the conclusion of the competition, all students have an opportunity to meet with leading employers at a job fair.

Holloway says that the competition is well-recognized in the industry and that he, like many other students, has found internship opportunities through contacts made at the event.

ASU teams were guided by Aaron Cohen, Kraig Knudson and Edwin Weaver, lecturers in the School of Sustainable Engineering and the Built Environment.

ASU teams and awards at the 2012 ASC Student Competition: