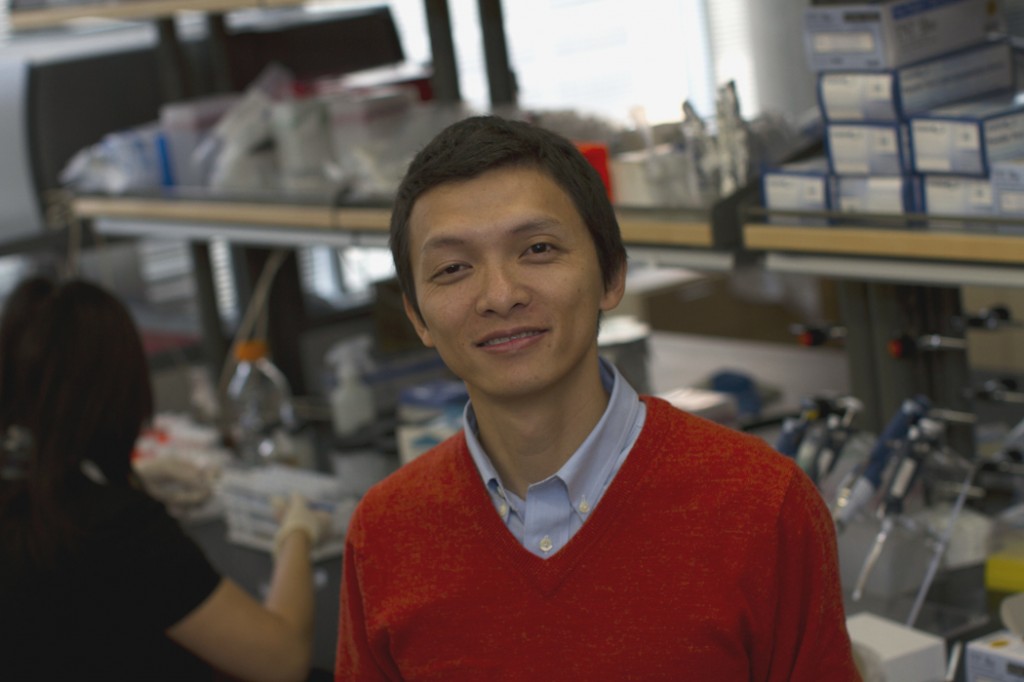 Synthetic biology involves the rational design of biological parts and systems as well as getting inside the cell and reprogramming it. The applications for this research are far reaching—from biofuels to pharmaceuticals.

“It is like trying to figure out how a plane works without knowing anything about it,” Wang says. “In most engineering fields you would try to reverse engineer it to gain an understanding of how it flies. In ours, it is a forward engineering approach. Based on the knowledge that you have, you try to build a simple plane to see if it will fly then work from there.”

Wang has a background in mathematics and says that he is attracted to the randomness of cells and trying to harness that knowledge to produce useful outcomes.

For example, adults have over 200 cell types that come from a single embryo. How do the cells know how and what to become? Additionally,  genes regulate each other in a network, but there are differences for different cell types.

“The goal is to understand these processes so we can directly engineer stem cells. The cells could be used for organ transplants to combat immune response issues—or even grow new organs. We can also engineer cells to produce drugs using less energy and lowering the cost,” he says.

Wang is also working on two grant-funded projects. Through funding from the American Heart Association, Wang is using engineered yeast cells to study the noise effect on cell differentiation and development. He says the results could be useful in stem cell therapy for cardiovascular disease. The National Science Foundation has funded a project to expand the mathematical framework used to analyze and understand engineered gene networks.

Both undergraduate and graduate students work in Wang’s lab. He is advisor to the ASU’s inaugural iGEM team, the first ASU team to compete in the International Genetically Engineered Machine (iGEM) competition, the premier undergraduate synthetic biology competition. The team was one of three to focus on Clustered Regularly Interspaced Short Palindromic Repeats (CRISPRs) and acquired antibiotic resistance. Impressively, the ASU iGEM team was awarded a bronze medal.

“Students who get into the field now will make history,” he says.