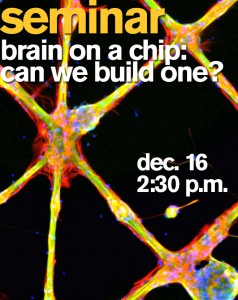 The wild idea that nerve cells grown in culture could have reliable computational function, while still a wild idea, is closer to reality than is reasonable to expect, thanks to applications of both engineering and applied biology. The metaphor works both ways: applications of more traditional engineering technologies–signal processing, electronics, microlithography, materials science–make possible the controlled growth, recording and stimulation of nerve cells.

In turn, the goal is to design, construct, test and utilize–in short to engineer–a working biological construct. In this lecture examples, mainly from the speaker’s laboratory, illustrate the component technologies that have been utilized in this pursuit, and illustrate how approaching the problem as an engineer leads to new questions.

biosketch
Bruce Wheeler is professor and acting chair of the Pruitt Family Department of Biomedical Engineering at the University of Florida. From 1980 to 2008, he was with the University of Illinois at Urbana-Champaign, most recently as professor and founding and interim department head of the Bioengineering Department. He was also a professor of electrical and computer engineering and the Beckman Institute, a former associate head of ECE and a former chair of the Neuroscience Program. He is the editor-in-chief of the IEEE Transactions on Biomedical Engineering, president-elect of the IEEE Engineering in Medicine and Biology Society and a Fellow of the IEEE and AIMBE.

He received his B.S. degree from MIT and later an M.S. and Ph.D. in electrical engineering from Cornell. Wheeler’s research interests lie in the application of electrical engineering methodologies, signal processing and microfabrication to the study of the nervous system, including the microlithographic control of the patterns of growth of neurons in vitro so as to permit stimulation and recording with microelectrode arrays. Hopefully, this work will lead to a better understanding of the behavior of small populations of neurons and lead to better insights into the functioning of the brain. He also has had involvement in algorithm development for directional hearing aids.