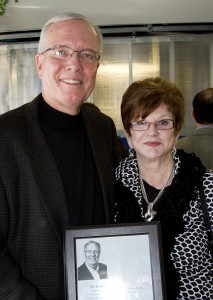 On Monday, Dec. 5, Dean Paul Johnson presented a plaque to Gary Tooker honoring his membership in the National Academy of Engineering.

Election to membership in the National Academy of Engineering (NAE) is the highest professional honor that can be bestowed upon engineers by their peers; more than 2,000 distinguished professionals from business, government, and academia hold membership in NAE.

Tooker was elected to membership in 1996, “for contributions to semiconductor design and manufacturing and for championing the implementation of quality management programs that have become a model for industry.”

After earning an electrical engineering degree from ASU in 1962, Tooker joined Motorola where he served in a number of positions including chief operating officer, president and vice chairman and CEO. He was elected chairman of the board in 1996. Tooker retired from Motorola in 1999, staying on as a company director through 2001.

Tooker’s plaque will join other alumni and faculty accomplishments honored on the Wall of Fame in the Brickyard, 6th Floor. Plans for a second display wall in the Engineering Student Center are in the works.

Tooker and his wife, Diane, also an ASU alumnus, are long-time supporters of Fulton Engineering and engineering education.

Tooker was honored during the ECEE senior capstone design presentations, where he encouraged students to be open, take advantage of  opportunities and create their own paths. He cited an example of a time when he did not get a coveted new project marketing job, instead moving into a new role in operations. He says that the move made him more well-rounded and opened opportunities for him that would not have been possible otherwise.