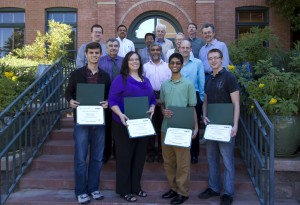 Four Fulton Engineering undergraduate students have received scholarships from the IEEE Power and Energy Society in the inaugural round of the Scholarship Plus Initiative™. Carrie Culp, Abhishek Dharan, Anthony Pelot and Alban Shemsedini are among approximately 93 recipients chosen from 51 U.S. universities.

ASU had the second highest number of recipients in the nation.

The PES Scholarship Plus Initiative™ is a new program established to attract high quality engineering students to the power and energy field. The industry faces challenges of responding to enormous growth, replacing aging infrastructure and adapting to new green technologies—challenges compounded by a projected energy workforce shortage.

To address these issues, the program supports high-achieving undergraduate student in electrical engineering who are committed to exploring the power and energy field. Recipients will receive annual financial assistance for up to three years.

Carrie Culp is a junior and says that she chose electrical engineering because of her interest in power electronics. She would like to work with power devices or fault protection in high-power transmission. Carrie is part of the Motivated Engineering Transfer Students Center, and a member of Eta Kappa Nu, EPICS, Society of Women Engineers, Society of Hispanic Professional Engineers and IEEE. Last summer, she participated in a reseach program at North Carolina State Universtity where her team researched wireless power transfer at the FREEDM Systems Center. She plans to pursue additional research opportunities while at ASU.

Abhishek Dharan is a sophomore in electrical engineering. This year he is living in the Sustainability House at Barrett, the Honors College. He says that the experience of living in a community filled with people interested in alternative energy has him thinking about the opportunities going forward, particularly with solar technology in Arizona. His many activities include Barrett Talent Match, Operation Smile, the IEEE student chapter and Team ASU Taekwondo. He also serves as a mentor for the Obama Scholars program and an informal education volunteer for the NASA Space Grant research program.

Anthony Pelot is a sophomore in electrical engineering. He is interested in researching new technologies related to power production, storage, conversion and transmission. His goal is to find ways to increase the portability and sustainability of electric power. Outside of ASU, Anthony works as a network administrator and web developer for several legal firms in the Valley.

Alban Shemsedini is a junior in electrical engineering. His ultimate goal is to use renewable energy resources to create electrically independent housing in third world countries where constant and stable electricity generation from the government is missing. His main interest is solar energy. Alban serves as vice president of events for a student business organization, Phi Beta Lambda.

The IEEE Power and Energy Society is a worldwide, nonprofit association of more than 28,000 engineers and scientists engaged in all aspects of the power and energy fields.

More information on the program is available at www.ee-scholarship.org.