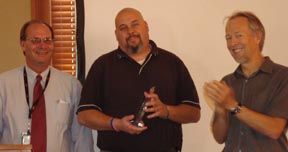 John Crozier, health and safety specialist for the Ira A. Fulton Schools of Engineering was presented the Environmental Health and Safety (EH&S) Exemplary Service to ASU Employee Safety. Leon Igras, EH&S director, and Jon Harrison, professor and associate director of facilities for the School of Life Sciences, presented the award at the Fall EH&S Compliance Officer Networking meeting earlier this month.

The award recognizes Crozier’s leadership in campus safety, particularly during two recent incidents. In both cases, he was called to respond to a late-night liquid nitrogen leak in the ERC building. As ASU’s representative, he worked with the incident commander—generally the fire department battalion chief—to contain the situation and ensure that the building was secure until EH&S could respond and confirm that the building was safe to enter the next morning.

Crozier is one of four senior compliance officers on Tempe campus. He serves as a liaison between Ira A. Fulton Schools of Engineering and  the ASU EH&S department. He says that engineering’s tremendous growth has enabled him to help provide training and fill resource gaps for EH&S.

He has also been part of the operations committee for ASU. The group helps to draft safety policies for review and approval by the policy  committee.

Crozier says that improving the safety culture is a priority for Fulton Engineering.

He recently held a workshop for student organizations to train students on general shop safety and working with power tools and compressed gases. Expecting about 100 students, he says he was overwhelmed when nearly 200 showed up. A follow-up event is planned later this year, with future workshops to be held each semester. He also says that online safety training will be rolled out over the next year.

His efforts mirror a campus-wide emphasis on safety. EH&S is working to nurture and grow the compliance officer program. They  have initiated a volunteer program to help fill the gaps and ensure effective university-wide safety communication.

Crozier says that he did not expect the award, and it was particularly special to be recognized outside the department.

Crozier has been with ASU since 1998, and with engineering since 2006.