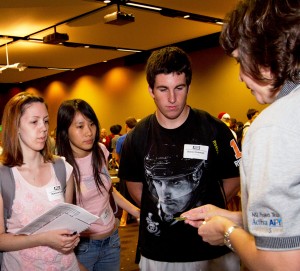 An industry representative talks to ASU freshman engineering students at Engineering Career Exploration Night. The event is designed to get first-year students thinking ahead about career planning as they embark on their college studies. Photo: Jessica Slater/ASU

At E2 Camp, the orientation camp for freshmen in Arizona State University’s Ira A. Fulton Schools of Engineering, students are told to immediately begin thinking of themselves as full-fledged members of the engineering community.

“Traditionally, students have had to get through two or three years of classes before engineering schools started letting them feel like they might be good enough to be let into  the club,”  Fulton Schools dean, Paul Johnson, told students at an E2 Camp session last summer.

In breaking with that tradition, Johnson said, “We want you to think of yourselves as engineers from day one at ASU.”

Such an event is typically be geared for juniors and seniors, “but we want to create a sense of community among our first-year students, and help them develop an identity for themselves as future engineers,” explains Robin Hammond, director of the Fulton Schools’ Engineering Career Center.