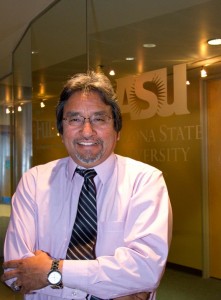 When you meet Fulton Schools of Engineering Associate Director of Academic Standards, Manny Aroz, it’s difficult to imagine him as a disruptive student. But he says that is where it all began. Young Manny was repeatedly given detention for disrupting his math class. Those hated after-school tutoring sessions actually helped him discover an affinity for numbers, and headed him toward a degree in mathematics. What has followed has been an extraordinary 34-year career mentoring, guiding and encouraging students at Arizona State University.

After graduating with a bachelor’s degree in mathematics from ASU, Aroz set his sights on becoming an actuary. But the job market was challenging, so he chose instead to begin student teaching at Marcos de Niza High School in Tempe. Upon completion, he received two job offers, including one from Marcos de Niza to join the teaching staff—and one from Arizona State.  Fortunately for everyone here, he chose the latter, joining ASU in 1977 as assistant coordinator of educational opportunities with Student Life. In this position, he supervised and developed training programs for tutors and peer advisors and counseled students on the development of effective study skills.

In 1982, Aroz joined the College of Engineering and Applied Sciences, accepting the position of coordinator for minority programs. In this role, his primary responsibility was to recruit and retain minority engineering students.

“There were not a lot of minorities in engineering at that time. There was a definite need and ASU provided a great deal of potential talent to fill that need,” says Aroz.

That same year, Aroz worked with five Hispanic engineering students to launch the ASU chapter of the Society for Hispanic Professional Engineers (SHPE). He served as the group’s advisor until his retirement this month—helping to build a highly successful organization that today has over 100 members. SHPE established the Manny Aroz Scholarship Endowment to honor his commitment and dedication.

Aroz continued with Fulton Engineering, serving as assistant director of student academic services, director of student achievement and his most recent position, associate director of academic standards. Of all his many duties over the years, coordination and leadership of student orientations has always been a favorite. “You can really feel the excitement from both the students and the parents,” he says.

It is his commitment to the continuing support of students from their first day at the Fulton Schools of Engineering through the completion of their choice of degrees that has made Manny Aroz an outstanding advisor and mentor to so many students throughout his time at ASU.

Today, in part as a result of the dedication of caring deans, faculty, advisors and staff members, he says there is a much stronger, school-wide support system to help students achieve their goals.  Advising, tutoring, time management and goal setting workshops, along with student organizations, have become key factors in helping students. In addition, he says that E2 camp and the Engineering Career Center have made a tremendous difference in the retention and long-term success of students.

Aroz relates a story from a recent orientation session: “I took a poll about how many hours the students studied per week. I asked how many studied over 10 hours, and then told those students whose hands were raised that they were very likely to be successful. To the ones who signaled that they studied 3 hours a week, I said they might succeed. To the students who studied less than 3 hours a week… well, I told them not to bother raising their hands. But it was too late—half the room had their hands in the air. Everybody laughed.”

“These students are smart and in many cases, have not had to study very much to do well. Now they are competing with the brightest in a very challenging field and may run into issues,” Aroz says.

His role as advisor and mentor was to help these students learn how to train for success. “I believe in setting your goals, planning your actions and then going in with the right attitude to achieve them,” he says.

A student who Aroz believed was very talented was disqualified from the engineering program because of his GPA. With Aroz’s advising and encouragement, the student tried again. Manny recently received a call from the grateful student, who had achieved the GPA needed to reapply and wanted to thank Manny for his advice and guidance. This is just one example of Aroz’s passion and commitment to help each student rise to their full potential and find the success they have worked for and deserve.

Aroz will officially retire from ASU on June 30, 2011. His wisdom, humor, insight and support will be sorely missed by students, staff and faculty. Thank you Manny, for making a difference in so many lives!