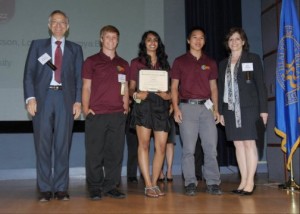 Two interdisciplinary teams of students from ASU’s Ira A. Fulton Schools of Engineering and the College of Nursing and Health Innovation took top prizes at the recent IOM-NAE Health Data Collegiate Challenge. Both teams are part of Engineering Projects in Community Service (EPICS).

Another ASU team took the third prize with IMPAct, a Web-based, interactive planner that allows individuals and families to keep track of medical appointments. IMPAct team members are Tania Lyon, Taylor Barker, Edgar Sanchez, Eric Kern, and Jennifer Jost. Their app can be explored at http://www.interactivemedicalplanner.com.

In the “Go Viral to Improve Health” competition, sponsored by the Institute of Medicine (IOM) and National Academy of Engineering (NAE), students were challenged identify a pressing health issue, then to use social networking, mobile apps and other technologies to create an app or product that increases awareness and inspires positive action.

Winning teams exhibited their technologies on June 9 at the Health Data Initiative Forum hosted by the Institute of Medicine and the U.S. Department of Health and Human Services. 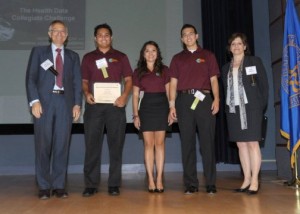