Engineering student excited about the future 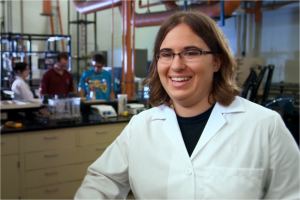 As a high school student in Phoenix, Alison Davis knew she wanted to stay in state for college but didn’t know that she would pursue engineering. In fact, she didn’t decide on the major until the week before school started.

“I had no idea what an engineer did. My parents didn’t know either. But my teachers said I should consider it,” she says. “Now I’m glad I stuck with it because I enjoyed the program and I’m excited about the future.”

Alison graduates on May 12 with a degree in chemical engineering from the Ira A. Fulton Schools of Engineering. During her time at ASU, she has gained experience through multiple endeavors but one in particular stands out.

As a junior, Alison joined the ASU chemical engineering car team sponsored by the American Institute of Chemical Engineers. The team had to build a shoebox-sized car that could be powered—and stopped—by a chemical reaction.

“As a chemical engineer, you don’t tend to use things like the machine shop. I actually had to learn how to  build the car,” she says.

“Our team leader, and many teammates, were seniors and graduated after the regional competition,” Alison says. “I had the opportunity to take over as team leader for the national competition. We put a lot of work into our car and were proud to win the Golden Tire Award for most creative design.”

Alison says that she did “a lot more than I ever thought I would” during her time at ASU.

She began research as a sophomore at the Biodesign Institute. Later, she participated in the Fulton Undergraduate Research Initiative, working with biofuels. She says she learned a lot, “especially when an experiment doesn’t go the way you want.”

For the past three years, Alison has shared her love of learning as an active participant with Camp Sparky, an interdisciplinary club of students that mentor at-risk fifth-graders in the Phoenix area.  The group organizes day camps designed to engage young students through hands-on projects such as architecture camps where they built things out of spaghetti and marshmallows.

“I want these kids to enjoy learning,” she says. “I want them to know that everyone has the opportunity to continue with their education. There are options and opportunities out there to help you be whatever you want to be.”

After graduation, Alison will be leaving Arizona for Utah, where she will work as a process chemical engineer for a semiconductor company.