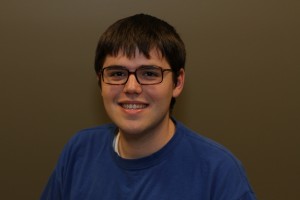 Fred Morstatter says he holds two unique titles from his ASU engineering experience: president of the Women in Computer Science Club and the only computer science student to go through the astro-physics lab science sequence.

“I had no physics experience, just an interest in astronomy,” Fred says. “It was really tough.”

What Fred does have is an innate talent in computer science. He says he was always interested in computers and tinkered around in high school. His first job at age 17 was a programmer for a trucking company. When Fred started looking at colleges, ASU popped up on his radar screen.

“I had seen an article about Google establishing a presence near ASU. I was looking for a new experience away from home and everything just came together,” he says.

At ASU, he has worked closely with Huan Liu, professor in the School of Computing, Informatics, and Decision Systems Engineering, whose research focus is data mining. Fred has published two papers as an undergraduate and won an Honorable Mention for the 2011 Outstanding Undergraduate Researcher Award from the Computing Research Association.

“Working with Dr. Liu, I have had the opportunity to pursue research that I really enjoy. He has also helped me understand what it means to be a graduate student. I’ve had a taste of it as an undergrad, but am looking forward to doing research and coming up with new things,” he says.

Fred has had several internships along the way, including one coming up this summer at a local software firm. He says the first question that comes up in interviews is always related to Women in Computer Science and how he got to be president.

“I’m the perfect example of why we need to attract more women to computer science,” he says.

As president of the club, he has helped grow membership—both men and women—and expand participation in the flagship computer programming event.

He has also worked to retain students in the computer science program, organizing a new tutoring center for first year computer science engineering courses and serving as an undergraduate teaching assistant.

Fred will graduate in May with a bachelor’s in computer science. He plans to pursue his doctoral degree, and continue research with Liu. It’s likely that he’ll pick up another title or two along the way.