Two engineering undergraduates have won 2011 Udall Scholarships. They are among 80 students nationally. Named for former Arizona congressman, Morris K. Udall, the $5,000 scholarships are awarded to sophomores and juniors who plan careers in healthcare, public policy and tribal policy. 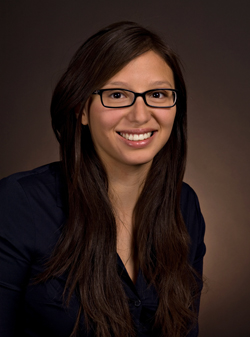 Samantha Aguirre says that her mentor, Tamana Begay, is one of the main reasons that she is now pursuing a career in dentistry. A year ago, she shadowed Begay at Indian Health Services dental clinic and says she found everything she wanted in a career.

She had never thought about becoming a dentist, but found the structure and hands-on nature suited her well. In working with Begay, Aguirre also found a place where she could make a difference.

Aguirre says that healthcare—particularly dental care—is not stressed on the reservation. The problem is often compounded by a lack of good nutrition. She saw first had the results at the clinic, which treats up to 30 people a day, many of whom have severely decayed teeth and are in a great deal of pain.

“It was amazing to see her helping Native Americans in a way I’ve never seen before. She used what she knew to make them feel better,” she says.

But Aguirre doesn’t want to simply treat the problem. She also wants to help people by providing education on dental health.

Aguirre attended an intensive dental program at the University of Kentucky last summer. The program gave her significant experience from organic chemistry to patient case studies. She was able to shadow dentists and even mold teeth.

This summer, she’ll be researching diabetic digestive kidney diseases. Next semester, it’s back to dentistry with an internship at Maricopa hospital. 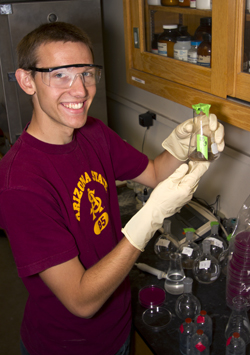 He is currently working with sand developed by a Chandler company that can filter and disinfect water. The sand is coated with a quaternary ammonium compound which attracts bacteria cells and splits them open, rendering them ineffective.

Kondziolka started his studies in sustainability, working in energy research. He found a number of crossovers between energy and water which ultimately led him to his current research. He also gravitated to the technical aspects of research and switched to environmental engineering.

Kondziolka has already seen the practical aspects of his field of study. Through Engineers Without Borders, he traveled to Ecuador as part of a trip to assess a water treatment system that had been installed. Located in southeast Ecuador, the area has plenty of water supply, but lacked clean, accessible drinking water. On another trip, he traveled to Kenya to study the issue of supply. During the rainy season, most of the rainwater runs off into a large lake. By the end of the dry season, nothing is left. In between, the residents face contamination and storage issues.

“We study systems and learn, but the real goal is imparting knowledge,” says Kondziolka. “We want to help them replicate systems on their own.”

Kondziolka is in Barrett, the Honors College, and plans to defend his thesis next spring. He also plans to seek out an internship opportunity with a local water company. A junior this year, Kondziolka has an eye on graduate school after a little time off to travel—just for fun, he says.

When he’s not in the lab, you can find Kondziolka playing Ultimate Frisbee. He’ll be competing in the tournament at the SRC field on April 23.