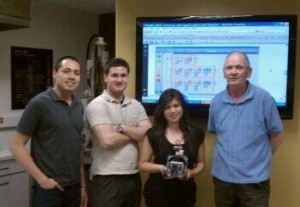 Mechanical engineering undergraduate students Manny Valdez, Erin Soto and Michael Thompson will be competing for the first time in the Avnet Tech Games this weekend. The team, sponsored by faculty member Bob Tripp, has entered the robot race competition.

Getting ready for the competition has been both fun and educational. Team members each came with strengths, and have had to stretch their thinking to solve problems.

At the event on Saturday, they will have five hours to build and program a robot using a LEGO Mindstorms® robot kit provided by Avnet. The robot must complete two different table challenges: a line following maze with points based on time and distance, and a maze course with points based on completion of up to three tasks and successful navigation of sections of the course.

The team researched prototypes and adapted their test robot. For example, many of the prototypes they found were not an exact match for what was needed because they have to use multiple sensors at the same time to accomplish the course objectives. Their test kit also used an older sensor—a problem solved by Tripp, who provided a new one.

Manny says he had worked at several of ASU’s engineering summer programs last year helping children with LEGO robotics projects and liked the idea of taking his experience to a competition.  Erin also had robotics experience through Summer Bridge.

Even though they are newcomers to Avnet Tech Games, they have an idea of what to expect. Through an event held at Scottsdale Community College, they met with past Tech Games participants to learn how the event is set up, what to expect and try out some sample mazes.

They still have programming work to do and will need to memorize their work to be able to recreate the robot at the competition. They’ve split up the tasks and have a plan to work together to share information.

Avnet Tech Games will be held April 9, 2011 at the University of Advancing Technology in Tempe.