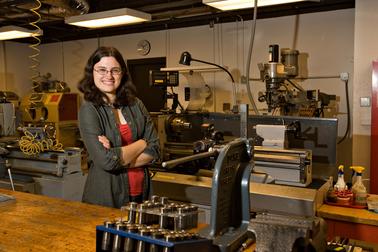 Spring break for Amy Kaczmarowski and four other ASU students featured two overnight plane trips and a 10-hour bus trip into the heart of Kenya.

For eight days they experienced heat and rain, and took long hikes to the Yalla River to collect water samples. They slept under nets, and learned to eat ugali, a cake made of ground maize, and fish eyes. Generous families fed them tilapia, roasted corn, collard greens and chapattis.

For Kaczmarowski, an ASU aerospace engineering junior who is working on her second overseas project for Engineers Without Borders (EWB), the experience was “fabulous.”

“It was a very productive trip, in the sense that it gave us a clear idea of what is going on,” she said on her first day back, still pumped by the adventure. “The Kenyans have so much need. The government provides treated water, but the pipes are in such terrible condition that the water is full of bacteria by the time it gets to them.

“There are about 20,000 people living in four communities in the Bondo District, and they have terrible problems with typhoid and malaria. For us, the solutions seemed so simple, to determine the filtration needed, and to design basic systems for storing and delivering water. But we learned that it’s a huge project.”

Once they’ve made an assessment, she and her team will report back to the national EWB organization. They’ll work with professional engineers, including a team mentor, to create a project proposal on creating a sustainable water supply for the district.

They hope to return to Kenya for a month in December to begin building a water system, and again for two months in summer 2012. About 30 ASU students are involved, though only eight or 10 will travel. The project is expected to take about five years, so other ASU students will eventually take over.

The team is raising money for the project with a 5K run around the Tempe campus on April 2, titled “Kenya Dig It.” While most of the construction materials are donated, the students must pay for their trip costs themselves.

Kaczmarowski is unusual in her commitment. She was also leader for the last EWB project in Ecuador, starting when she was a freshman. Civil engineering professor Edward Kavazanjian said he is amazed by her energy and accomplishments.

“Amy served not only as manager but as the inspirational leader of the ASU team,”said Kavazanjian, group adviser. ”She successfully negotiated the cultural challenges in dealing with a small tribe on the edge of the Amazon rain forest and Ecuadorian regional government officials, as well as the logistical challenges involved with managing a group of up to 15 students working in a foreign country.

“She ably coordinated design of the system and worked through several challenging technical issues on the project, including developing appropriate, sustainable filtration and disinfection schemes for the village’s water supply.”

In addition to her EWB activities, Kaczmarowski does research on ionizing radiation modeling in the lab of electrical engineering professor Keith Holbert, director of ASU’s nuclear power generation graduate program. She also is deeply involved with NASA Space Grant Robotics, as chief mechanical engineer for a competitive student team.

Her eventual goal is to work for a private space development corporation, to improve technology that will make a space faring civilization possible. She said she chose to attend ASU not only because of the quality of the Fulton Schools of Engineering, but also because she was “very excited about the School of Earth and Space Exploration.”

“I love the idea of programs that are so incredibly interdisciplinary,” she said. “Space exploration itself seems to rely so heavily on so many different fields, it just makes perfect sense to participate in a program that trains you to think about all of the different aspects.

“With Fulton’s astronautics concentration, I actually get a lot of exposure to the SESE classes, so it makes the engineering degree at ASU just that much more interesting.”

A Flinn Scholar from Gilbert, Kaczmarowski also is enrolled in Barrett, the Honors College.

For more information or to support the EWB project, go to http://www.ewb-usa.org/chapters.php?ID=184.